A performance project that celebrates and showcases the creative talents of people living with Parkinson’s.

"We want to show the world what people with Parkinson's can do!"
- company member

Devised in collaboration with the company, HerStory is an operatic performance work combining dance, music, film and animation, celebrating the exploits of a local Suffolk heroine, Margaret Catchpole. The company’s goal is to stage performances of the finished work in Suffolk and London, with a cast including members of the Parkinson’s communities from each location.

Throughout the summer of 2019 CARVE worked with community participants to develop material for the performance in a series of workshops, culminating in an Open Session at Snape on August 20th 2019.

The next phase of the project will see members of the Parkinson’s community in London join the CARVE team for a residency in the Royal Opera House, in preparation for a Live at Lunch sharing of excerpts from HerStory in the Paul Hamlyn Hall on 19th June 2020.

To keep up to date with the progress of HerStory,  visit the PROJECT BLOG.

"In this project I have seen people stretch themselves and then blossom when they find their involvement is a success. It gave me personally a feeling of wonder, my anxieties diminished and I felt full of joy that my performance was enjoyed and appreciated by an audience."
- Participant
"It’s given me confidence and reduced isolation. It’s given me new friendships.  It’s given me something to look forward to. It’s given me happiness and a sense of something achieved. It’s made me feel a little bit special in the fact that we all have something to give creatively."
- Participant
"We all saw the potential to increase self-awareness and confidence which will, inevitably, improve our well-being. It's very rewarding being part of a creative group that, together can pull something like this off especially under the direction of such talented guidance."
- Participant 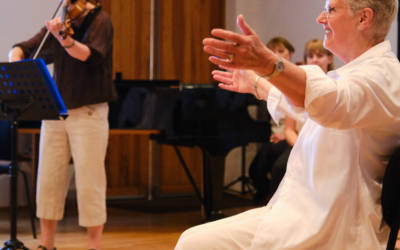 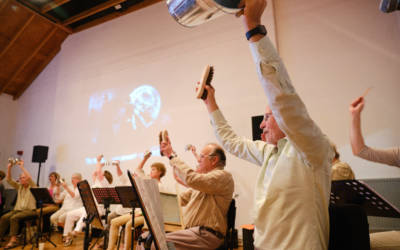 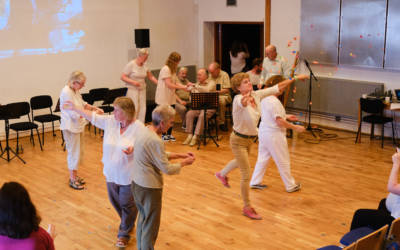 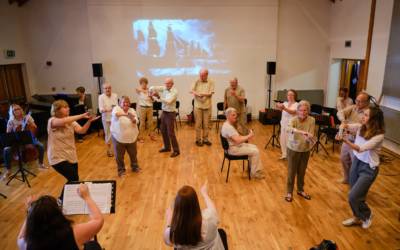 Am I dreaming? Or am I really singing in an opera? Yes, an opera!

The relationship between me and this most grandiose of the performing arts has always been polite but cool and distant. This despite my grandmother taking me as a boy to see the Little Baddow Players performing “The Marriage of Figaro,” or a bit more recently going with my wife to see “The Magic Flute” at the Prague Opera House. I’ve always tended stick with the folk music.

But whatever stage you might be in life, changed circumstances bring with them new opportunities. A year or so ago I joined a “Singing for Parkinson’s” group. Singing and movement are known to have a positive effect managing the symptoms of this condition, and I was very happy to go to Snape Matings once a fortnight to sing and be sociable.

However Amy, the leader of the group, had more to offer us. She is part of a team writing a brand new opera, and a number of us have joined the Company that will take it forward to its first production.

The opera is based upon the life and loves of Margaret Catchpole, a maidservant who lived 200 years ago but is well remembered in Suffolk, the County of her birth. There are a lot of myths about what Margaret really got up to, but a consensus agreement regarding her illegitimate birth into grinding poverty, her employment by local grandees the Cobbold family, and her love for a sailor William Laud, that led her into many misadventures.

That phase of her life is positively Pickwickian, with a stew of fierce night time rides, stolen horses, sickly children, smuggling and shooting, a hanging judge, an escape from prison. Music and dance build this drama, there are drinking scenes, courtroom scenes and prison scenes. And beyond this scenes of letters being written and posted.

Margaret was sentenced to death for horse stealing, but the sentence was later commuted to transportation for life, and in due course she arrived at Botany Bay.

Mrs Cobboldd had been an enlightened employer, and while Margaret was a member of her household she had learnt to read and write – a rare achievement for a working class girl in that era. After her arrival in the penal colony she began a correspondence with Mrs Cobbold, and her letters have been preserved for posterity. According to the Australian Dictionary of Biography she has provided one of the best accounts of convict life at that time, with remarkable descriptions of the aboriginals, the wildlife, and the natural disaster if a river flood.

It seems that Margaret achieved redemption for the crimes she committed in Suffolk, for some years after her arrival in Australia she received a pardon. However, she never achieved her ambition of a return to England, dying age 57.

Parkinson;s sufferers in the cast or seeing this production may reflect on the fact that Margaret found herself in a strange place, and never got back to where she started from , but it was still worth writing home about.